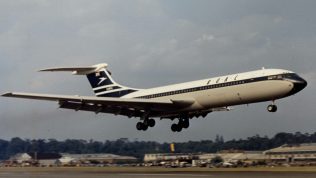 Dowty Electrics Ltd: Picaseal limit switch, Microseal limit switch, Hermic limit switch, toggle switch, two-position indicator, three-position indicator, undercarriage lever switch, undercarriage indicator, wander button switch, press-to-test indicator, throttle-grip switch, hand-grip switch, remote positional control system display, as applicable to nosewheel steering. Particular interest should be created at Hanover by a new hydraulic-powered vibrator developed by the Dowty Group. This is said to be more than 50 per cent cheaper than any fatigue-testing equipment of similar capacity at present available, and is claimed to have cut the “hitherto formidable cost barrier for industry, the universities and smaller research establishments.” Vibration of every kind can be simulated by the new machine, in the erection of which special precautions have had to be taken in order to guard against vibrational damage to other exhibits at the Fair. The equipment is sited in the runway area on a 10-ton foundation of concrete.

A notable Boulton Paul exhibit will be a spoiler actuator as used in the control system of the Vickers VC10. Twelve of these jacks are incorporated, arranged in pairs, one pair to each spoiler surface. The spoiler surfaces have a dual function: they can be extended on each wing, acting as air brakes, or can be operated in conjunction with the aileron controls to augment aileron power. To achieve these conditions, for which light operating loads are essential, the jacks have been designed to operate with Boulton Paul rotary control valves, which have a background of extensive laboratory testing and flight experience behind them.

In view of the Continental interest in the Hawker P. 1127 particular note will be taken of the flying control equipment “for the next generation aircraft, including VTOL or STOL” produced by Dowty Rotol. This equipment is specified for the P. 1127 as well as for many Continental projects designed to meet NATO requirements for VTOL and STOL strike and transport aircraft. 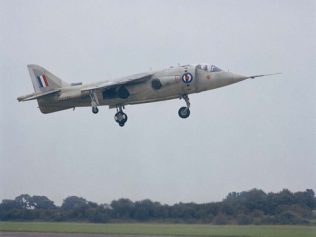 Hawker P.1127 – the experimental and development aircraft that led to the Hawker Siddeley Harrier c.1964