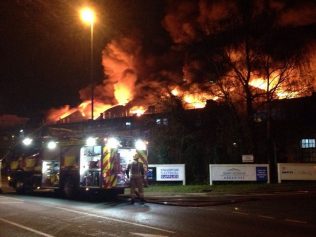 On the 5th February 2015, 80 firefighters attended a large blaze which destroyed 80% of Dowty’s propeller factory in Staverton, Gloucestershire.

The blaze began in the roof space of the facility, where propeller systems for aircraft are made.

The damage is estimated to have caused a $260 million loss for the parent company, GE Aviation.

80% of the factory building was severely damaged by the fire causing significant financial loss.

The factory’s main production line was destroyed by the fire, so alternative premises needed to be found and 65% of staff were redeployed.

Twenty-nine staff were evacuated from the site and no one was injured.