I lived in Corsham, Wiltshire and attended the Secondary Modern School for Boys and although I did well in all subjects, I did not enjoy my school life and could not wait to leave!

So in 1965, I decided to leave without any formal educational qualifications and no job!

Not the most sensible thing I have ever done!

During the last few weeks of school, those of us who were leaving, were visited by the Careers Officer, he asked us what kind work would we be interested in doing.

Now the bells started ringing… at 15… I didnt have a clue!

The school I attended had excellent facilities, including fully equipped Woodworking and Metalworking Workshops with modern machine tools… but as this was the early 1960’s… I was’nt given a choice about Woodworking or Metalwork… you did as you were told… so it was Woodwork for me !

The Careers Officer gave me three booklets to read, as I enjoyed woodwork, he gave me a book on Pattern Making, as we had several foundries in the area where there might be opportunities, he also gave me book about the available careers in the Post Office… as I liked motorcycles, I had always fancied being a Telegram Boy!

Then finally, he gave me a book about careers in the Engineering business sector.

When I started reading these books, the Engineering book looked really interesting and when I returned to meet with the Careers Officer again, I said I would like to get involved with engineering if possible… which was fortunate for me,  as Dowty Group (New Mendip Engineering at Atworth) were looking to recruit apprentices along with the Dunlop Tyre and Spencer Weatherly companies who were all located in the Melksham area… so I wrote a letter to all three and Dowty were the quickest to respond and invited me for an interview.

Although I had no school qualifications, I had to sit a National Institute of Industrial Psychology (NIIP) Exam.

One of the tests that we had to complete, was where the Examiner held up a piece of Blackboard about 2 feet square, behind the board and only visible to him was a set of gears and pulleys, with different lengths of string, with weights on, appearing from below the board… he would pull each string and we had to work out on a sheet of paper which gears and pulleys were moving and in what direction…. easy!

There were other school leavers there who did have qualifications GCEs/UEIs, so I was quite concerned that I wouldn’t be able to pass the exam but I did pass and passed it well and I was offered an apprenticeship the very next week!

I started work at New Mendip Engineering (Dowty Fuel Systems) in September 1965, two months before my 16th birthday and I was able to sign my Apprentice Indentures with my Father on my 16th birthday 1st November 1965 – all very formal.

The Indenture Agreement was signed by the New Mendip Engineering Site Director, Mr Sharp and the Apprentice Training Manager from Arle Court, Mr Thurston, this was then witnessed by Tony Earl who worked there as a Craftsman

I spent the first year of my Craft Aprenticeship in the newly constructed and well equipped Apprentice School Workshop, along with about eight other boys, here we were taught the basic engineering skills by the Training Instructor, Reg Shepherd who was an ex Swindon Railway Works fitter, he was highly skilled and likeable. Here we made our own tools and as one of the apprentices fathers owned a Cabinet making factory in Bath, we also made our own toolchests following the Moore & Wright design.

The machine tools in the Apprentice School Workshop were all painted “pink”!

Each week, for one whole day and an evening, we attended the Chippenham College to study for our City & Guilds Part 1 Mechanical Engineering qualifications.

Then after two years at the New Mendip and due to unforseen family circumstances, I had a critical decision to make to enable me to complete my apprenticeship, I needed to request a transfer to Dowty at Gloucester. So in 1968 I was transferred to Dowty Rotol, where I worked in No. 1 Shop, Marking Off, Deep Hole Boring, Grinding, and then Centre Lathes with a short spell in “Stalag”

My City & Guilds Part 2 studies were transferred to Gloucester College.

After a year at Rotol, I was then transferred to Dowty Royal House (Montpelier, Cheltenham) in 1969 to complete my apprenticeship, specialising in fitting.

At Royal House I gained valuable experience in the reconditioning of machine tools from all over the Dowty Group sites and the craftsmen that worked there, were some of the most highly skilled in the Dowty Group.

At the end of my apprenticeship, I had passed my City & Guilds Part 2 qualifications with Credit and I was offered a role as a Machine Tool Fitter with Dowty Group Services, Arle Court, Cheltenham. 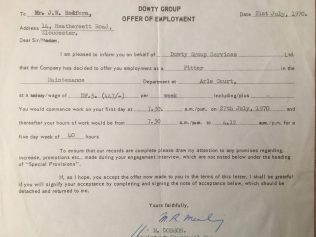 Offer of employment to John Redfern in 1970

The Mechanical Foreman of the Maintenance Department at the time was Ron Kingscott; with Gerry Sirrell as the Leading Hand… as I gained more experience, I was seconded to Gloster Engineering to replace Bob Stephens who was transferred to Arle Court to become the Leading Hand after Gerry Sirrell was promoted as Foreman.

When Dowty Hydraulics Units starting setting up 57 Unit at Kingsditch Trading Estate, Cheltenham,  I was transferred there as the Site Maintenance Fitter, I enjoyed my time there, working with Bryce Reay, Brian Rose and Steve Fry, then after about 12-18 months I was then transferred back to Arle Court in a another reorganisation.

Then in 1975, I was transferred to Innsworth Metals as the Site Fitter, not the best move for me as I considered this site to be a real health and safety hazard, I was expected to carry out repairs to overhead cranes, working over chromic acid, nitric acid, cyanide electro-plating baths…. there was also a hot and dangerous foundry too… after a few months,  I requested a transfer but was declined, so with regret, I decided I had to find alternative employment.

After getting married and starting a family, money was tight and although Dowty was a great employer in many ways they were not the best at pay, also it did not look as though there was much room for me to progress further, so I left Dowty in September 1975 and went to work at ICI Fibres, Brockworth.

At ICI, I was recognised very quickly and within months, I became an Engineering Supervisor and by the end of my engineering career, I had risen the ranks within ICI, DuPont and Invista to become the Site Engineering Manager for Construction & Contracts, all of which started from the trust that Dowty’s had in me as a young 16 year old, for which I will always be grateful for, along with my co-workers for the help they gave me in my working career.