Our photographic records found in the Dowty Heritage Archives, found two pictures of models, of the Bluebird-Proteus CN7 Land Speed Car and a photogarph of a Dowty Machinist, machining one of the shafts for the car.

The Bluebird-Proteus CN7 was driven by Donald Campbell and achieved the world land speed record on Lake Eyre in Australia on 17 July 1964.

We knew that SIr George Dowty was a good friend of the Campbell family and probably agreed to help Donald Campbell in anyway he could.

The Campbell family legacy of breaking land speed records went back to Sir Malcolm Campbell born in the county of Kent, England in 1885.

He was a racing driver and journalist who took on the challenge, between 1924 and 1935, of setting numerous land speed records in various cars that he choose to christen “Bluebird”.

Sir Malcolm passed away in 1948, and his son Donald, born in 1921, decided to take on the challenge of speed.

He started on water with his father’s old record boat Bluebird K4. With modifications, the boat showed great promise, but he did not manage to set any new records with it.

Donald commissioned a new boat the Bluebird K7 of extremely advanced design, and through the 1950’s, set many new water speed records.

At the end of the 1950’s, he commissioned a land speed record car, which he christened Bluebird-Proteus CN7.

It was a stunningly beautiful car, powered by a modified Bristol-Siddeley Proteus turbine engine driving all 4 wheels.

Bluebird CN7 was the first land speed record vehicle to be powered by a gas turbine engine. The Bristol-Siddeley Proteus was the Bristol Aeroplane Company’s first successful gas turbine engine design, and delivered 4,450 shp (3,320 kW) with no thrust allowed by FIA, exhaust was limited to fill in aerodynamic disturbance at the rear. The Proteus was a two spool, reverse flow free-turbine turboshaft, because the turbine stages of the inner spool drove no compressor stages, but only a power shaft. The engine, a Proteus 705, was specially modified by Norris Bros to have a power shaft at each end of the engine. These shafts are connected directly to final drive assemblies with differentials and fixed ratios of 3.6:1 providing power to all four wheels via half-shafts. 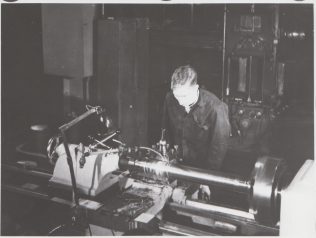 The Bluebird-Proteus CN7 was driven by Donald Campbell and achieved the world land speed record on Lake Eyre in Australia on 17 July 1964.

Sadly, Donald Malcolm Campbell CBE was killed while attempting a new world water speed record in the modified Bluebird K7 on Coniston Water, Lancashire, UK on the 4th of January 1967.