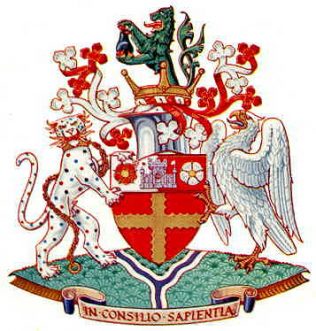 About the Coat of Arms

The golden cross on red refers to the arms of Tewkesbury Abbey and occupies the place of honour. The castle is derived from the Common Seal, which displayed a representation of a castle and the red and white roses refer to the Battle of Tewkesbury in 1471.

The demi-lion with two tails is from the arms of the arms of Robert Dudley, Earl of Leicester, who was responsible for obtaining the first charter in 1574. The Saxon crown denotes a Royal Borough with ancient Saxon origins.

The black pear from the arms of Sir George Dowty, who was granted the Honorary Freedom of the Borough in 1964, for bringing a good deal of new employment to the town and who subsequently presented these arms to the Borough.

The heraldic Panther is from the arms of the Dukes of Beaufort, who have served the town as High Steward and the Eagle from the arms of the Earl of Coventry, whose family have had a long association with the Borough. The compartment shows symbolically the confluence at Tewkesbury of the Rivers Severn and Avon. 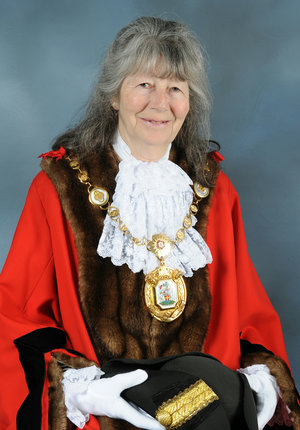 On the reverse side of the Tewkesbury Mayoral Chain and Badge of Office, the following inscription is engraved: “This chain of office was presented by Sir George Dowty, D.L., September 1974”.