Sir Robert Frederick Hunt (b. 1918 – d 2004) was the right-hand man of Sir George Dowty, the engineer inventor who built his business out of Cheltenham between the wars.

Robert Hunt, whose parents had separated when he was 11 and whose mum was a hair dresser in Cheltenham, went to Cheltenham Grammar School.

Time spent his local garage after school, fuelled his interested in all-things mechanical and he went on toe train as a mechanical engineer.

Dowty was working on hydraulics for aircraft undercarriages and Hunt became a design draughtsman in the team which produced the landing gear for Frank Whittle’s jet-propelled Gloster aeroplane: its first take-off in 1941 was one of Hunt’s proudest moments.

The Dowty business had started as a specialist hydraulics business making products used mainly in mining.

During the war, Hunt ran courses for RAF flight engineers on the hydraulic systems in Lancaster bombers, and the end of the war found him working on hydraulic springs for motorcycles, which he enjoyed testing on the Gloucestershire hills. In 1946 he became export manager of Dowty Equipment, and in 1949 he was posted to Ajax, Ontario, to establish a new factory producing components for Canadian aircraft makers. He returned at the end of 1956 to play an increasingly dominant role in the group over the following three decades.

Robert Hunt’s work was primarily in applications for aerospace, he was part of the team that made landing gear for the first prototype Harrier jump jets and the power controls for Concorde. He was on the plane on one of the early test flights.

According to the Daily Telegraph, which carried an obituary on his death, aged 86, on 17th September 2004, “Bob Hunt was a commanding presence, a forceful manager and a dedicated engineer who built a team around him and kept Dowty at the forefront of its industry at home and abroad.”

He was deputy chairman of the Dowty Group from 1957.

Sir George died in 1975 and Sir Robert went on to become chairman until 1986. 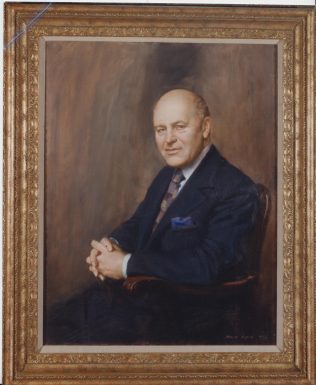 He was also president of the Society of British Aircraft Constructors from 1977-78.

He was also a Deputy Lieutenant for Gloucestershire.

zoom
Sir Robert Hunt was the right-hand man of Sir George Dowty, the engineer who help build his business out of Cheltenham
zoom
Robert F Hunt - Dowty Group Chairman
Original photo in the Dowty archive at the Gloucestershire Heritage Hub