George Herbert Dowty (1901-1975) was an aeronautical engineer, industrialist and founder of the Dowty Group of Companies. 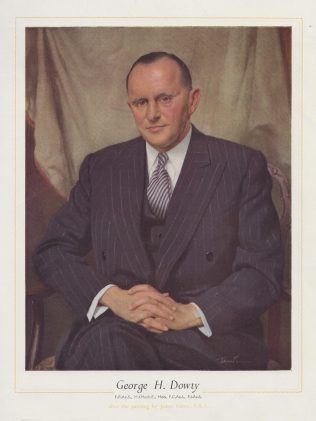 Born at Pershore,  27th April 1901, Worcestershire, the son of William Dowty, a chemist in Pershore, and his wife, Laura Masters. He was the elder of twin boys by half an hour and the seventh son in the family. 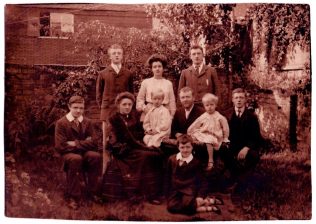 When he was ten year old his father died. His brother-in-law Sidney Fitzroy Fell took an interest in the boy and gave him a model steam engine that started him on an interest in engineering.

George was educated in a small private school in Pershore until 1913 and then at the Worcester Royal Grammar School, which they were obliged to leave at the age of fourteen because their older brothers had been conscripted into the army and they had to help in running the various family businesses.

At the age of twelve Dowty lost his right eye during some experiments with photographic materials, when a bottle of magnesium powder exploded.

George Dowty spent a year in the family business, but his early interest in engineering led him to join Heenan and Froude in Worcester as an apprentice.

In July 1918 George Dowty obtained a new job as a draughtsman with the British Aerial Transport Co‎ in London. The company’s chief designer was Robert Noorduyn and the technical head was Frederick Koolhoven and this experience accelerated his career rapidly and perhaps impatiently.

He was elected a student member of the Royal Aeronautical Society in 1918 and became one of the first Associate Members of the Institution of Aeronautical Engineers.

He worked for T. Cooke and Sons, scientific instrument makers of York where he worked on Naval range-finders

He was employed by Rownson, Drew and Clydesdale of Kings Cross where he worked on the design of elevators and conveyors

He joined the Dunlop Rubber Co where he worked on the design of compression rubbers used in aircraft undercarriages.

He joined the design office of the A. V. Roe and Co. By the age of twenty-one he had designed landing gear for the first Cierva Autogyro and for the Avro Aldershot. 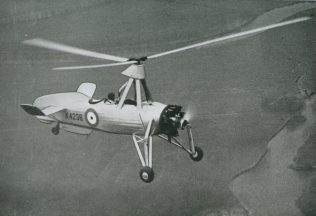 He joined the Gloster Aircraft Co. By this time he had read a number of papers on undercarriage design to the Institution of Aeronautical Engineers, and was already working at home on several ideas that he was later to patent.

He took out a patent on arresting gear mechanism. 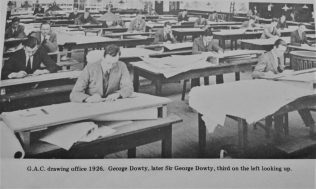 George Dowty at the GAC Design Office in 1926

He took out another patent on arresting gear mechanism.

Took out a further patents for a wheel incorporating oil shock absorbers, steel springs, and brakes operating on the wheel rims.

He decided to set up his own company and formed the Aircraft Components Co,  while still employed at Gloster Aircraft Co. This was a shell company with no staff, no capital and operated from a registered office address in Lloyds Avenue, London.

He received his first order on March 10th the Civilian Aircraft Co of Hull but unfortunately this company went bankrupt before they paid for the struts.

Resigned as Draughtsman from the Gloster Aircraft Co at the end of June and formed Aircraft Components Ltd, Cheltenham.

George Dowty’s first real success was with his invention for an internally sprung wheel. The firms first order came from the Kawasaki Company of Japan, for six internally sprung undercarriage wheels and then built them in premises at 10 Lansdown Terrace Lane in Cheltenham. 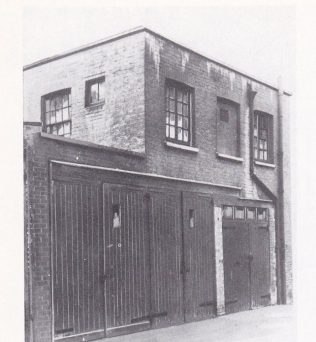 He recruited his first two employees in November. 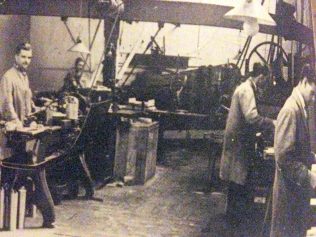 There were 11 employees working for Aircraft Components

A major breakthrough occurred when he offered to Henry Folland (Gloster Aircraft Company, Aviation Engineer) a pair of newly designed Oleostruts, for the Gloster Gauntlet aircraft.

This gave him his first large production order which began two long associations with famous aircraft constructors, to supply undercarriages for the Gloster Gladiator and tail wheels for the Bristol Bulldog. 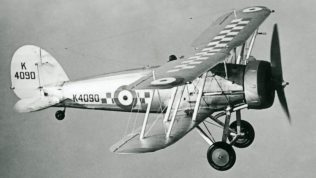 In this year, the total employees numbered 45

Growth of the Company

Orders on the books only totalled £5,000. In the same year Dowty leased a factory and bought Arle Court, Cheltenham

The firm went public with Dowty holding only a small percentage of the equity. 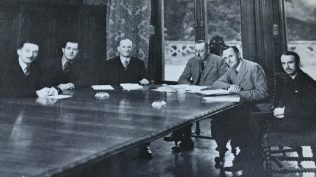 Board of Directors First Meeting

He was elected a Fellow of the Royal Aeronautical Society

By this time the order book had reached £10,000 and Dowty had established factories throughout Britain, Canada and the USA.

The firm invented the first ever internally sprung aircraft wheel and went on to make the landing gear for Sir Frank Whittle’s jet-propelled Gloster aeroplane. 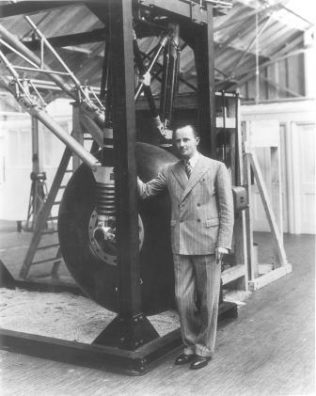 Married Marguerite Anne Gowans, daughter of M. J. H. Lockie, of Newmarket, Ontario, Canada; they had a son and a daughter. 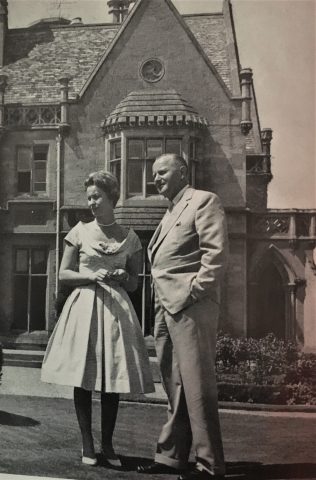 Dowty was active in the Royal Aeronautical Society, being elected its president for 1952–3.

Two years later he was awarded its Gold Medal for outstanding designs and development of aircraft equipment. 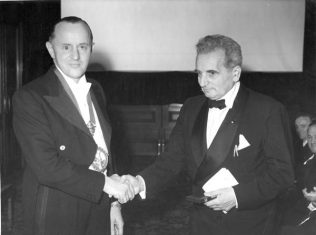 As the various Dowty Group companies continued to thrive, it was clear that a business was needed to run a business, to this end Dowty Group Limited was incorporated on 18th March 1954 and its headquarters based at Arle Court, Cheltenham.

A group holding company was formed with the Canadian operation generating 50 per cent of the total turnover.

Dowty Group also began a long period of collaboration with the French Group Messier on aircraft landing gear and hydraulics.

The Royal Aeronautical Society elected him an Honorary Fellow.

Meco of Worcester was acquired

Sir George Dowty, Hon DSc, CEng, Hon FRAeS, MIMechE, FlAeS, Hon FCAI was given the Freedom of the Borough of Cheltenham and Tewkesbury and was a Deputy Lieutenant of Gloucestershire. 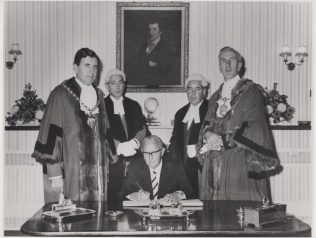 This photograph shows Sir George, with the civic dignatories in the Mayor’s Palour, Cheltenham

George Dowty was knighted for his services to the industry. 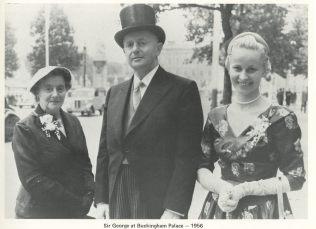 The Society of British Aerospace Companies elected him President for 1960-61.

Both Bath University and Cranfield College of Technology conferred on him Honorary Doctorates of Science. 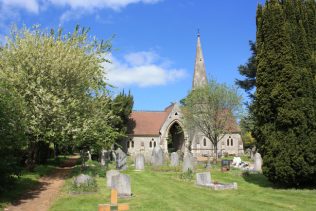 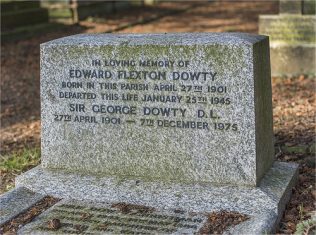 The Time of Change

In the late 1980s diversification saw Dowty move into telecommunications, computer equipment and the manufacturing of mining systems solutions and entered the FTSE 100

Dowty Group was acquired by TI Group and in 1993 its new owner sold off seven Dowty Group companies specialising in electronic equipment. One of which became Ultra Electronics.

TI Group transferred the Dowty landing gear business into a joint venture formed with SNECMA, known as Messier-Dowty and in 1998 that business became wholly owned by Safran.

The French business acknowledged the value in the Dowty name, its landing gear arm at Staverton known as Messier Bugatti Dowty. It piggybacked the name with its own branding. Until now.

That firm is now known as Safran Landing Systems.

Today there are few aircraft in the western world both military and civil which do not boast some of its components.

It’s not quite the end of an era for the famous name, however, thanks to another firm.

Despite a devastating fire which destroyed its Staverton base, the name synonymous with engineering greatness lives on at GE Aviation’s Dowty Propellers.