Dowty Mining Equipment - The Sell Off

The Dowty Group was a market leader in the manufacturing of mining systems solutions.

Dowty Mining Equipment was based in Ashchurch, near Tewkesbury and was one of its many engineering arms, producing hydraulic pit props and mechanised roof supports.

It won the Queen’s Award to Industry for Technological Innovation in 1968. 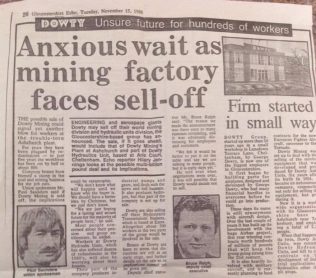 In 1992 the Dowty Group was acquired by TI Group which began to break the business up.

Seven former Dowty companies were sold off in 1993, one of which was Dowty Mining to the American giant Joy Global Inc.