The mechanism receives the accolade from the Institution of Mechanical Engineers in recognition of its contribution to the evolution of aircraft and the establishment of the UK landing gear industry. 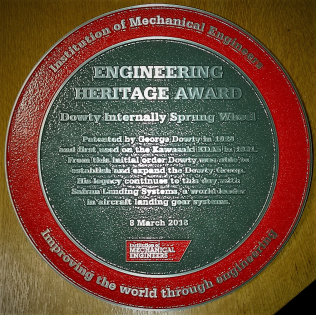 The Dowty internally sprung wheel, the undercarriage aircraft wheel designed and built by Sir George Dowty in the 1930s, has been presented with an Engineering Heritage Award by the Institution of Mechanical Engineers at a ceremony at Safran Landing Systems in Gloucester on Thursday 8 March 2018. 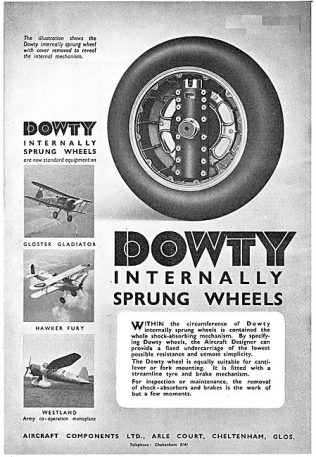 The device is being recognised for accelerating the evolution of aircraft of the time, increasing a plane’s ability to fly at higher speeds and transmit higher braking loads safely through a slender undercarriage.

Although Dowty did not design the first internally sprung wheel, previous designs by Curtiss of America and Breguet of France were not refined for practical application.

Dowty saw potential in the sprung wheel, refined its design and set up his own business. He quickly received interest from Kawasaki, one of Japan’s first aircraft companies, which ordered six internally sprung wheels for the KDA5 type 92 aircraft.

The internally sprung wheel was later used on such aircraft as the Hawker Fury, Westland Lysander and Gloster Gladiator.

Previous winners of Engineering Heritage Awards include Alan Turing’s Bombe at Bletchley Park, the E-Type Jaguar and Concorde, the fastest ever airliner. Other aircraft-related winners include the Short SC1 VTOL aircraft, a plane which provided data that influenced later designs of aeroplanes, the Rolls-Royce RB211 engine and the Vulcan Bomber XH558, the last airworthy representative of the RAF’s V-bomber fleet.

The Dowty internally sprung wheel is the 115th recipient of the award.

John Wood, Chair of the Engineering Heritage Committee and Past President, said:
“The internally sprung wheel is the foundation on which the Dowty empire was built. Dowty had many difficulties to overcome during the development and manufacturing of the original wheels, however, he was able to produce a quality engineered product on time and budget. The successes of this product lead to more orders, allowing him to expand the company.

“Over the coming years, Dowty company expanded internationally, eventually designing and manufacturing equipment for many engineering sectors including: hydraulics and actuation, aerospace Landing Gear, mining equipment, and propellers. Without the success of the internally sprung wheel Dowty would not have been able to break free and establish a variety of successful companies.”

“We are honoured to receive this Engineering Heritage Award on behalf of Sir George and his truly innovative and entrepreneurial spirit. Without this early development by Sir George the business would certainly not be the world leader it is today in landing gear design and manufacture.

“The business today continues Sir George’s original ethos and spirit with a significant emphasis on innovation and new technologies, which are key to keeping us at the forefront of advanced technology landing gears for the aircraft of today and indeed for the future.”

Thanks to the Institution of Mechanical Engineers for the article, a full report can also be viewed by copying the following link: