In 1988 the Leicestershire Constabulary set up a Project Team consisting of Inspector Adrian Woodward and Sergeant Gary Lewis to organise and equip new control rooms within the Force with communications handling and the infrastructure including everything except the command and control system.

At the same time the computer department was tasked with acquiring the latest command and control system for information handling.

Previously, the force had held a year long review covering all departments and it was decided that the Force Control room together with the eight sub-divisional control rooms would be refurbished with the latest equipment available.

The view of the Project Team was that the latest available communications control equipment was not suitable for use in what was seen as a fast moving pace towards screen based systems and, looking at the market place, there appeared to be few systems currently available which combined radio and telephone control together.

Whilst there was a system operating at Exeter airport which linked telephone and radio systems it had no approval for connection to the public network. Another system which was just in use in Edinburgh was having distinct connectivity problems.

Speaking with some companies e.g. BT, it was clear that they wanted to move towards such a system but one was not available.

The Project Team decided that, in order to move in the right direction, it would be necessary to devise a system on paper that would work as control rooms wanted it to work. So with a blank canvas the team wrote a specification for a screen based system which would emulate the manner in which control room operators preferred any operational system to function.

This took may months of re-writing the specification and, at last, it was completed to our satisfaction.

The system was to be based on touch screen technology with both radio and telephone control being displayed on the same screen.

At that time touch screens were hard glass with an infra red mask fitted which determined the location of the operator’s finger thus designating which displayed key was required to be activated. Although this worked in practice it was a little bit ‘clunky’ but ahead of its time.

The radio system was to utilise the home office vhf and uhf systems then in use by the Force.

The operator’s headset would have telephone in one ear and radio in the other except when selected, the radio or telephone would transmit to both ears at the same time.

We then went to tender to see if any companies wanted to bid for the development and provision of nine systems for our Control Rooms.

Amongst the companies to respond were Dowty, British Telecom, the Exeter airport system (name not known) and others. I recall six in all.

The various companies were asked to demonstrate their ability to produce a system and some did to varying degrees of operation and a wide range in cost.

Following a period of evaluation and discussions, it was agreed to award the contract to Dowty systems based at Marshfield. 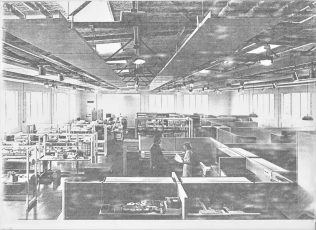 There followed many discussions about how the Dowty engineers understood the police requirements and how the system was required to work practically. It seems that software engineers work on a different planet to us mere mortal Police Officers.

However, work commenced and over the next months and years the system was developed at Marshfield with fortnightly visits by the team to check on progress and identify where it was considered the system was not functioning as per specification.

One of the problems encountered was that, as a new system, it was not approved for connection to the telephone network. This was solved by BT agreeing that the installation of barrier boxes between the system and the network would suffice, at least until the system was proved to be safe for general connection. This proved to be somewhat costly.

The Commissioning date slipped, as do all computer systems, and, fortunately, so did the Computer Department’s command system.

As a result, the first system was shipped and installed in 1992 at Force HQ control room and, apart from one fault, worked perfectly.

The fault being that the software staff had failed to realise that the memory was not being purged at midnight and, as such, filled to overflow and the system crashed. This hadn’t happened in the factory because at the end of the working day the system was switched off and the memory died.

The eight other systems were manufactured and installed on a rolling program over the following 12 months.

Such was the interest in the system that it was taken up by other Forces and, I understand, Fire Brigades.

It was great to be associated with such (then) advances in comms equipment and it all started with a blank piece of paper…..