In February 1969, a fire spread through the Dowty Electrics factory at Ashchurch, it was the largest fire in the Tewkesbury area for over 10 years.

The fire destroyed the top floor, roof and half of the third floor, over 100 fire fighters from 12 neighbouring fire brigades attended the scene to tackle the blaze.

They fought the blaze for over two and half hours, while in the basement, over 100-tons of volatile polymer rubber was stored. 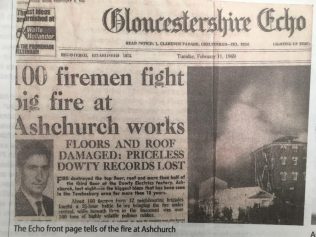 Here are some memories of the people who remember the blaze.

I was working the night shift at Dowty Seals when the fire started, you could see the glow from the flames showing in the sky out by Gotherington, we on our coach thought it was Ashchurch camp, we got onto the Ashchurch Tewkesbury road and got caught up in the traffic, when we finally arrived at Dowty Seals, we got sent back home, the fire brigade were worried about the old ‘ custard ‘ factory catching alight…. Jim Ball


I was involved in going in to salvage whatever possible from the stationery stores which was located in the building at that time. We always called the building The Custard Factory as that is what it was previous to Dowty…. Jan Goddard


I was working at Dowty Servos in Tewkesbury from 1970 – 1972 and one of the fitters was working at Dowty Electrics when the fire took place. The toolroom was situated on an upper floor. After the fire, he and others climbed up and into the factory to salvage their toolboxes and other tools that hadn’t been ruined by flames and water. Machines were hanging across the girders at precarious angles and it was very slippy as they stepped from girder to girder with water dripping down on them. They salvaged height guages, set squares and toolboxes before climbing back down. They had been told not to enter the building by Firemen & Dowty staff but still went ahead, putting their lives at risk…. John Russell


Remember my Dad the night this happend . He went out on his push bike to go and see what was on fire , as he thought it was Dowty Seals or Mining burning down…. Chrissie White


Still got, and use, my dads Machinery Handbook that was in that fire. The dye has run into the pages where it got wet from the hoses…. Lloyd Thomas