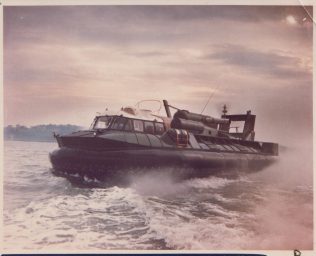 It incorporated several features that resulted in the type becoming the one of most produced and commercially successful hovercraft designs in the world.

Dowty supplied the propellers for this Hovercraft.

Hovertravel was a ferry company operating from Southsea, Portsmouth to Ryde, Isle of Wight, UK. It was the only passenger hovercraft company currently operating in Britain since Hoverspeed stopped using its craft in favour of catamarans.

Hovertravel is now the world’s oldest hovercraft operator, and this service is believed to be unique in western Europe. The service commenced operations in 1965 and currently operates two hovercraft on a single route between Ryde and Southsea, although it formerly operated also between Ryde and Gosport, and Cowes and Southampton.