My name is Steffen Justus from Germany.

By chance I came across the “Dowty Heritage” website of your company and would like to make a contribution.

I was employed by the company Röder Präzision in Egelsbach near Frankfurt am Main in the hydraulic department from 1985 to 2016.

In 1987, I was asked to work as a Service Engineer for the company Dowty Rotol.

For this, it was necessary for me to move to Manching in Bavaria, because the company MBB (today, Airbus Defence and Space) is located there and my job would be to look after the landing gear on the Tornado aircraft. 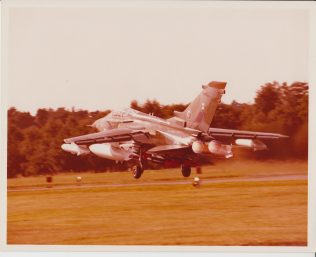 At that time, Röder had a gentlemen’s agreement with Dowty, that it would provide a Technician to look after the Dowty Rotol landing gear components during the warranty phase.

After some initial hesitation, I signed a 5-year contract and, after completing several weeks of training at Dowty Rotol in Gloucester and at BAe Warten at the end of 1987, I started a new aera of my professional life on January 16th 1988, at the age of 28.

It was the beginning of the most exciting time of my professional career, during which time I met so many interesting people, which I will never forget.

After the new production of the MRCA Tornado came to an end in 1991, it was a seamless transition to the prototype phase of the Eurofighter. Here, too, I was responsible for the support of the main and nose landing gear components, main and door actuators, door and landing gear locks.

The 5-year contract turned into 25 years of working for Dowty, travelling to all the countries where the Eurofighter was produced and in service to perform modifications and repairs.

I visited very often Alenia in Turin, CASA in Madrid, BAe Warton, various bases of the German Air Force also in Sardinia and of course Dowty Aerospace in Gloucester about 15 times.

I would like to thank all those who supported me in my work, first of all Richard Nicholson who hired me in 1987 but also his successor Ian Mowatt, and gladly remember many meetings, business trips and visits in various pubs with my colleagues Derek Pittaway, Steve (forgot his surname), Dean Wheeler, Steve Barnes and some other guys of the Product Support department. I also worked closely with the Quality Department, here especially with Ian Fawcett.

From 2013 onwards, the workload for me diminished to such an extent that my contract was unfortunately terminated. In 2016, I also left Röder and am now working in the mechanical engineering industry.

Now 63 years old, I will retire in 2024, but the time I spent working for Dowty remains unforgotten for me.

Thank you very much for that.