An Engineer from Churchdown - A very British hero!

An article from the Daily Mail by Geoffrey Wansell – March 2009

“The single black and white photograph of Emlyn John wading ashore on the Normandy beach on that fateful morning of June 6, 1944 – D-Day – is one of the most iconic images of the Second World War. 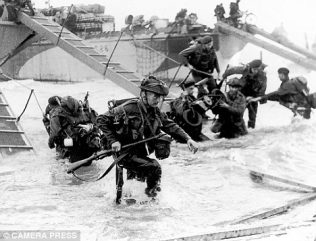 Weighed down by his waterlogged kit, his tunic part unbuttoned, the bespectacled 22-year-old steps carefully on to the beach in a picture which came to symbolise the immense courage and dignity of the 156,000 Allied soldiers who landed in France on that single day, 65 years ago this year.

Calm, almost matter of fact, this shy craftsman, from the Royal Electrical and Mechanical Engineers was just one among the thousands of conscript soldiers from around the world who walked fearlessly into the carnage that lay on the beaches in front of them.

In the background, his comrades unload a despatch rider’s motorbike, specially adapted for the coastal conditions.

Emlyn John, from Churchdown in Gloucestershire, was an engineer. His role was to support the men of 48 Royal Marine Commando, men who had already left the craft and were in front of him on the beach near St Aubin-Sur-Mer as he descended from the vessel – many of them already lying dead or wounded, butchered within seconds by German machine gun fire and artillery.

Charged with keeping the Marines’ machinery and weapons working in the heat of battle, it was selfless men like John who put themselves in harm’s way and changed the course of history on that terrifying, chaotic but inspiring day, more than six decades ago.

This week, the Mail used this iconic image to launch its campaign for Normandy veterans.

Operation Overlord, as it was codenamed by the U.S. Supreme Allied Commander General Dwight D. Eisenhower, involved an invasion force of 3.5million troops descending on those French beaches and it began with the largest seaborne invasion in a single day of all time.

And this photograph of a common man, that single British soldier, walking through the surf and into history on what the German Field Marshall Erwin Rommel christened ‘the Longest Day’ gives us all a poignant reminder of that extraordinary event – even though it conceals almost as much as it reveals.

It cannot convey the merciless din of gunfire and explosions that surrounded Emlyn John, nor the screams of wounded men he struggled past, nor the smell of blood that seeped from the wounds of comrades who waited to be dressed amid the confusion on those five Normandy beaches.

Nor can it show the true bravery of the men involved. Emlyn John couldn’t even swim, and was desperately afraid not just of the enemy fire raking the beaches ahead of him, but also of losing his glasses.

The photograph does not reveal that Emlyn, the son of a coal miner, from Tonypandy in south Wales, and whose family had moved to the English countryside when he was a boy, was a devout Christian.

The truth is that he struggled with his conscience and never wanted to kill – yet he went on to win the George Medal for valour.

After the war, Emlyn’s devout belief stayed with him. He told his son, Noel, that he was never proud of what he did on that June morning. For the rest of his life, this modest and immensely private man carried a keyring made from the pin of a hand grenade, telling his son: ‘That was the last grenade I ever threw, and may God forgive me for what I did.’

But when called to duty, John never flinched from the battle. He made it across Juno Beach with the surviving men of the Royal Marines, alongside Canadian troops that faced no fewer than 14 heavy batteries of 155mm guns and nine medium batteries of 75mm guns.

The forces landing on Juno also had to contend with machine-gun nests, pillboxes, concrete fortifications and a sea wall twice the height of the one at nearby Omaha Beach.

The first wave of men arriving on Juno suffered 50 per cent casualties, the second highest among the five DDay beachheads. It’s been estimated that 2,700 British soldiers were killed on the Normandy beaches that day.

But Emlyn was one of the survivors, fighting his way through France and Belgium in the two months that followed, until suffering a shrapnel wound in August and being shipped home.

Within weeks of being injured, however, he was back with his unit, once again supporting the Marines, and although he was allowed a brief compassionate leave to marry his wife Clare, he ended the war among the ruins of Berlin.

After the war, like so many other soldiers of his generation, Emlyn John simply went back to his home and picked up his life as a milling machinist at the engineering firm Dowty Rotol, in Gloucestershire. He stayed at the company for 37 years, cycling to work every day before retiring in the early Eighties.

He and Clare had two children, a daughter, Marlene, followed by a son Noel, but – sadly – his life after the end of hostilities brought a further tragedy. Clare died when Noel was just three, and he was left to bring up the children alone, until he married again six years later.

‘He didn’t like to talk about the war,’ Noel told the Mail on the 60th anniversary of the landings. ‘I still don’t even know what he did to be awarded the George Medal.’

When his children were young, John would take them on quiet visits to some of the places in Europe that he’d fought at in the months after D-Day. But, significantly, he never took them to Juno Beach.

In fact, John didn’t actually see the iconic image of him jumping on to the beach until shortly before he died of cancer in 1995, at the age of 74.

Noel remembers that his father was astounded when it appeared on television during the 50th anniversary celebrations. ‘He was a shy man,’ his son recalls. ‘He didn’t much like those big gatherings with everyone wearing their berets and medals.

‘But we’re very proud of him,’ Noel goes on. ‘Although, if he’d been alive today he would have been embarrassed by the celebrations.’

Emlyn John may have been an unlikely war hero – but hero he was, and it is the sheer dignity and selfless courage of this brave, but retiring man, that makes his photograph all the more poignant now – 65 years after it was taken.”