Dowty Group announces the introduction of the Dowty Jet Turbocraft which will be on exhibition at the National Boat Show opening at Earls Court on December 30th 1959.

With a spectacular performance, this boat has no propeller or rudder. It is built by Dowty Marine Limited of Cheltenham Road, Staverton, Gloucester, a new member of the Dowty Group. 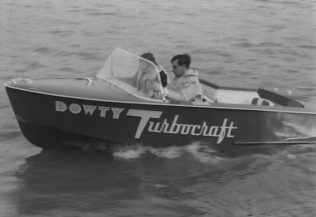 A 14’ 9” Dowty Turbocraft powered by a Ford Zephyr 2500 cc straight 6 cylinder engine being demonstrated on the River Thames in London, circa 1959.

HULL
Rugged fibreglass construction of the hull, deck seats and engine cover, gives a high strength/weight ratio structure which is impervious to all in-and—out of water conditions, and lends itself to easy maintenance. No painting is required, as the skin and wall of the hull and deck contain colour pigment throughout.

The design of the hull with its 10 degree deadrise at the after planing surfaces contributes to the “boats ability to turn in its own length at top speed, and, as there are no underwater appendages, it can operate at high speed in water as shallow as 4 inches.

The front bench seat is adjustable and the two occasional seats are reversible to give rear- facing for water ski observation.

The engine cover is made in two parts, the top half being removable to give full access to the engine.

THE ENGINE
The Dowty Turbocraft is powered “by a marinised Ford Zephyr MK 11 high compression engine (7:8:1) capable of developing 90 B.H.P. at 4400 R.P.M. As fitted, the maximum r.p.m. in between 3,500 and 3,700 (approximately 70 B.H.P.), ensuring that the engine mil have a prolonged, active life. The engine is completely water cooled, water being pumped direct from the marine jet unit through the sump to the manifold, circulated to the block, then to the exhaust pipe and out via the transom.

The reliability of the Zephyr engine is well established and the Ford Organisation offers a comprehensive servicing cover.

THE MARINE JET UNIT
Propulsion is by an efficient two-stage jet unit which draws water into the turbine through a steel grid fixed flush with the bottom of the boat and is ejected through the transom. The reaction from the jet stream propels the boat. The grid keeps out larger debris though the jet unit will pass small particles of sand and gravel. The unit is extremely quiet in operation and requires very little maintenance.

Full power is available on starting and the maximum progressive thrust gives the boat outstanding acceleration. A hand, operated lever system moves a gate by which the jet stream is either fully cleared (ahead)* completely blanked (neutral) or deflected forward under the hull (reverse) j this eliminates the need for reversing gear normally driven by the engine. The marine jet not only supplies cooling water to the engine but also, by manipulating an on and off cock can be used to pump out the bilges.

One great advantage of this form of propulsion is the elimination of conventional underwater gear. There is no propeller, shaft, strut, rudder or scoops to imperil the safety of bathers and water skiers and fishing lines and ropes cannot become fouled. The marine jet allows remarkable manoeuvrability and gives a performance which brings a new exciting era to the boating world.

STEERING
Steering is by a dished two spoke steering wheel on the column of which is fitted a sprocket. A chain passes over the sprocket and is connected to a galvanised steel wire rope which, through a pulley system, is connected to the marine jet steering column.

The latter connects to two steering vanes which deflect the jet stream. The pulleys used on the fore and aft inner hull are fitted with ball race inserts to give easy movement.

FUEL SYSTEM
The fuel tank is mounted in the rear of the boat and is fitted with a sediment sump and drain—off cock. The fuel is taken from the top of the tank and a shut-off cock is fitted to enable the sediment bowl filter, which is fitted between the tank and the petrol pump, to be removed. On the Zephyr engine downdraught carburation is used and an air filter is fitted to act as a flame trap to minimise fire risk. All piping is of solid drawn copper tube with flared joints.

FITTINGS
Standard equipment on the forward deck is a handle, 2 fair leads, one cleat, and a navigation lamp complete with pennant mast. On the stern deck are two cleats, two air vents, a ski hook, petrol filler cap, and stern light complete with ensign mast. Four small cleats, two port and two starboard, are provided for fendoffs, in addition to the fendoff strip around the gunwhale.

There are four step-on pads, two either side. Two nylon mooring lines are provided.
A metal framed wrap round windscreen is fitted around the forward cockpit. The comprehensive dash panel includes an R.P.M. indicator with hour meter, ignition and oil warning lights, water temperature gauge, petrol gauge, ignition/starter key switch, choke and light switch. This switch allows for the fitting of a searchlight.

Provision is also made for an M.P.H. indicator as an optional extra. There are foot and hand throttle controls. The wiring harness allows the fitting of a horn.

Loose washable seat cushions and squabs are provided to match the selected colour scheme. Flooring is of marine ply to BSS.1088 covered with non-slip Trakmark; the rear cockpit panel is also covered with Trakmark.

I was very glad to have been given the opportunity of extensively testing the Dowty Turbo-Jet Craft. This new development is most impressive, for it combines excellent performance and outstanding manoeuvrability with a degree of safety hitherto unknown.

There has long been a need for an alternative to the exposed marine screw propeller, which is both vulnerable to damage, and being a rotating knife, a source of danger to swimmers, divers and water skiers.

The new turbine propulsion unit provides the alternative, since it has no exposed moving parts. Further, the absence of any protuberance beneath the hull bottom means the boat can be driven in normally inaccessible waters.

The Turbocraft is ideal for water skiing, sports, and runabout purposes, and I believe it will be received with great acclaim throughout the world.