Shadow Factories were the outcome of the Shadow Scheme, a plan devised in 1935 and developed by the British Government in the build up to World War II, to try and meet the urgent need for more aircraft, using technology from the motor industry to implement additional manufacturing capacity. 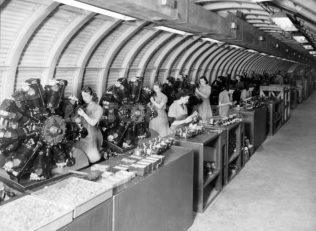 The Shadow Factories were financed by H. M. Government and both factory workshops and their plant remained Government property but they were managed by the factories as agents.

Within a year, five Shadow Factories were set up and run by motor car companies:

All of the manufactured components were inspected by the Aeronautical Inspection Directorate.

The first engine assembled from the composite parts underwent testing at the works of the Bristol Aeroplane Co.

The engine selected for production was the Bristol Mercury VIII, a fully supercharged nine cylinder air-cooled radial engine with a power output of 825 b. h. p. at 13,000ft, designed by Mr. A. H. R. Fedden.

Two of these engines were installed in the Bristol Blenheim bomber.

Each firm specialised in different components of the engine. The Rootes (Humber) factory produced the crankcase rear cover, blower and accessories.

The Daimler Company manufactured the crankcase, oil sump, priming system, and such like.

The Standard Motor Co was responsible for the cylinder group, and the Rover Company at Tyseley, provides connecting rods, pistons, valves, and tappet gear.

The Austin Company produced the crankshaft and the reduction gear, etc.

General Erhard Milch, chief administrator of the Luftwaffe, was in Britain in the autumn of 1937 inspecting new shadow factories in Birmingham and Coventry, RAF aeroplanes and airfields!

Hitler attempted to destroy Spitfire production during the war, by bombing prominent Spitfire factories, but Shadow Factories took their place and production continued in underground workings, sheds, workshops, garages, bus depots and even a hotel were used as bases to manufacture and assemble spitfires during the war.

It was impossible for these facilities to be secret, although they were camouflaged after hostilities began.

Several Shadow Factories were located underground around the country, these factories were more like large towns, not only did they have their own fully equipped workshops but hospitals, restaurants, shops, underground railways etc… making use of old quarry workings, such as those at Corsham, Wiltshire set aside for the Bristol Aircraft Company and Drakelow, Worcestershire which was operated by the Rover Car Company.

Another facility was located in an old mill at Ossett in Yorkshire, this mill was called Moorcroft Mill but at at the beginning of of WW2, H.M.Government requisitioned the mill from Hepworth Brothers to establish a new armaments and aircraft factory.

This mill was operated by Rotol Airscrews and they manufactured metal propellor blades here.

The Kingsway entrance to Hepworth Brothers, Moorcroft Mill in 1936.

There was an Avro shadow factory based at Yeadon, Yorkshire, in fact it was the largest single factory unit in Europe at that time.

Yeadon is about 20 mies from Ossett and undoubtedly all of the industries in the surrounding areas would have been supporting this factory, including the the one operated by Rotol Airscrews.

At the request of the Air Ministry, Dowty Equipment were asked to forward their proposals to support the Heavy Bomber Programme for Landing Gear on the Lancaster, Halifax and Stirling Bombers – Jul 1942 (see report below) where they were considering the Corsham Facility but they had reservations!

The Shadow Factories, staffed mainly by unqualified young boys, girls, and women, worked in secret to build Spitfires, Hurricanes, Lancasters and other aircraft, their efforts were instrumental in winning the Battle of Britain and WW2.