In 1940, the Aircraft Components business which George Dowty had set up changed its name to Dowty Equipment Ltd.

The headquarters of Dowty Equipment, Ltd., was located at Arle Court, situated in over 70 acres of parkland on the main Gloucester road, some 3 miles south-west of Cheltenham.

The factory buildings were sited to merge harmoniously into their natural surroundings, so that the ideal atmosphere of a country estate was maintained.

The factory, which had some 1,500 employees, was chiefly engaged on prototype and development projects on aircraft undercarriages, pumps and other components for hydraulic systems.

Here undercarriages for all types of aircraft were designed, developed and tested.

They included those for the Bristol “Brabazon”, and many of Britain’s post war high-speed fighters.

Situated at Arle Court was the largest undercarriage drop test rig in the world, and three smaller ones were also in constant use in the undercarriage research department.

It was on this equipment that the original tests on the “Comet” undercarriage were carried out on behalf of the de Havilland Aircraft Company.

The hydraulic test department is fully equipped to test all types of pump, valve and complete hydraulic system.

Twenty-eight different aircraft were fitted with Dowty equipment, which included 12,900 sets for the Hurricane, over 90,000 other undercarriage units, and more than a million hydraulic units. 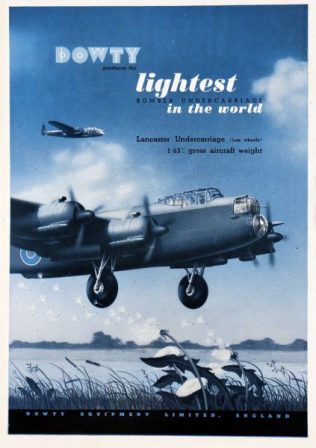 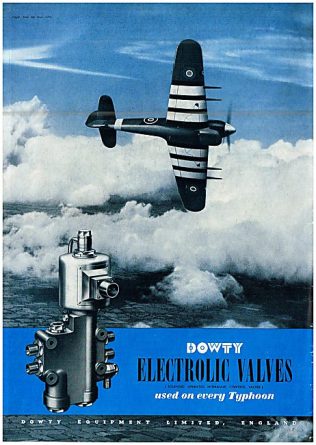 Plants were set up throughout Britain and in Canada and the USA.